How to Use the Failover Function of Magewell Pro Convert Encoders

In today's media-rich world, keeping audiences engaged requires a constant, uninterrupted visual experience. Deploying redundant equipment for automated fault tolerance can help ensure that viewers don’t miss out on key content even in the event of a technical disruption.

Beyond providing fault tolerance during an unexpected failure, failover functionality is also valuable for maintaining continuous 24/7 display while reconfiguring the primary encoder.

This blog will explain how to use this failover function.

Steps to enable the failover function

1. Connect the PTZ camera to the two encoders through HDMI cables. The encoders and computer are all connected to the same network switch via network cables, and the decoder is connected to a display through an HDMI cable, as shown in the following device connection diagram:

2. Log into the Web GUI of the main encoder. Click "NDI" in the top menu, and turn on the "Failover" switch. From the pop-up menu, select the backup Pro Convert encoder, then click "OK". 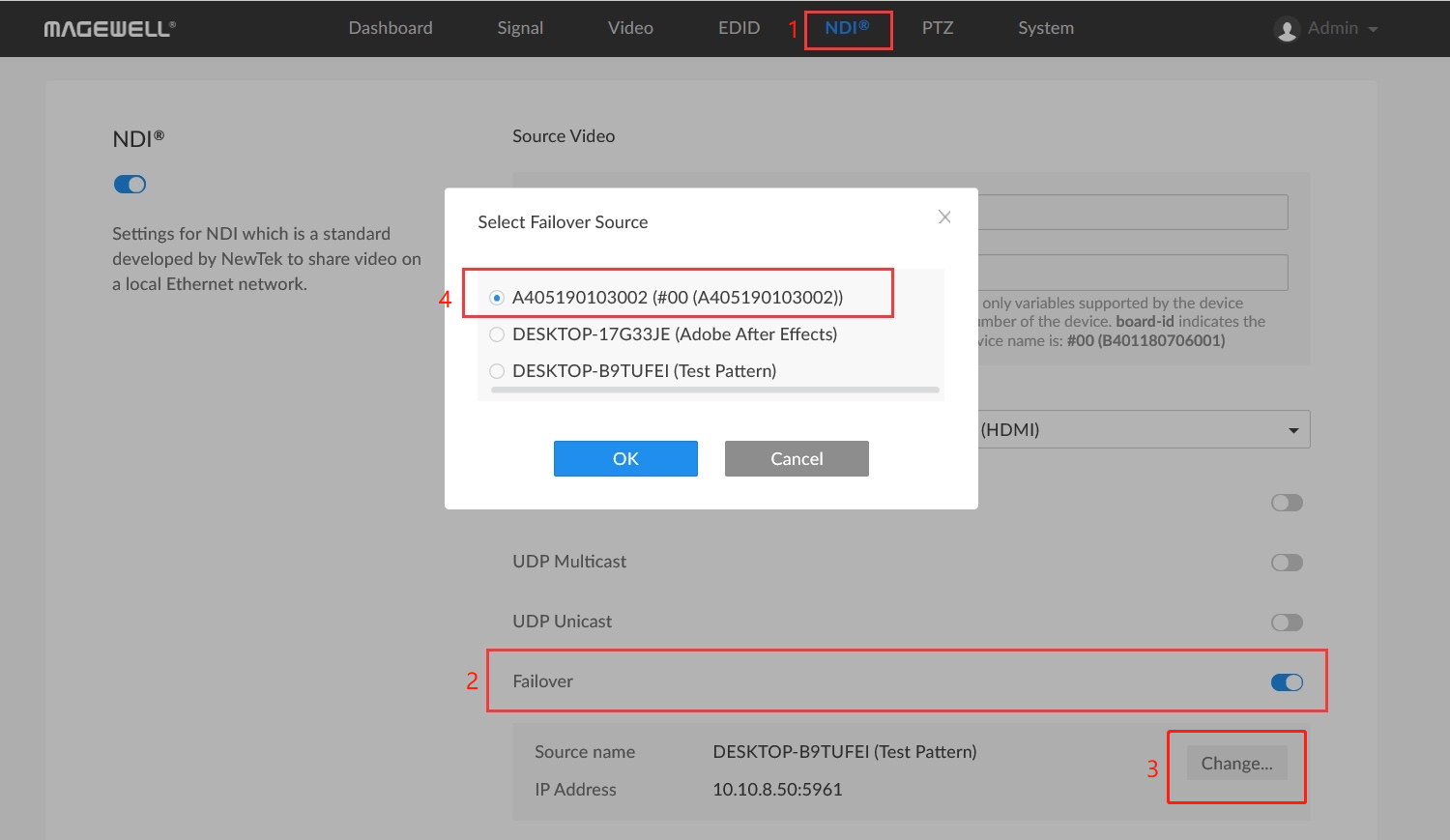 3. Scroll down to the bottom of the page, then click "Apply." The failover function is now enabled. 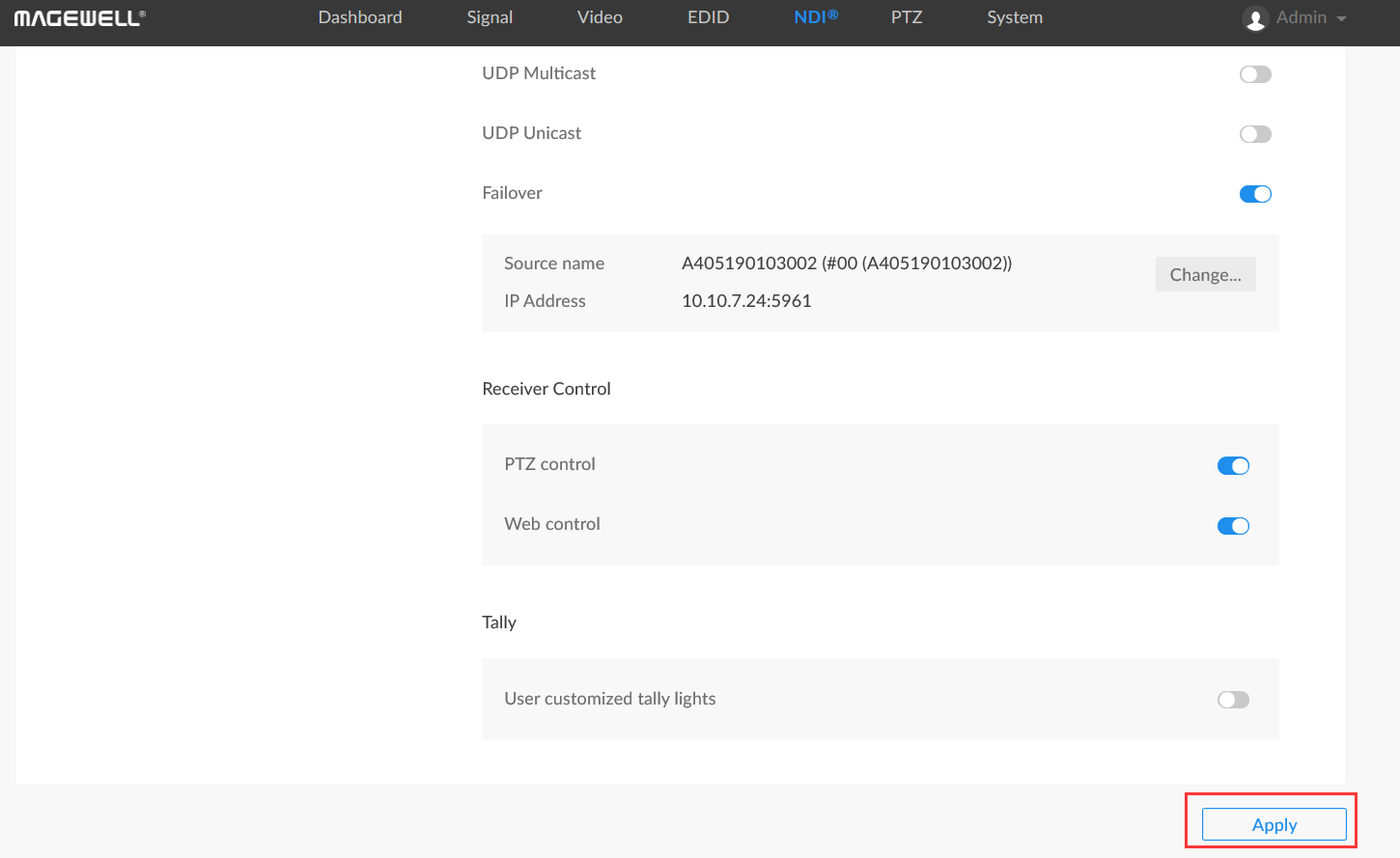 The failover function is triggered if the decoder cannot access the NDI stream from the corresponding main encoder on the same LAN. When this happens, the backup encoder will automatically begin to provide the NDI source for decoding and display. Three situations in which this can occur are:

1. The main NDI channel is closed. 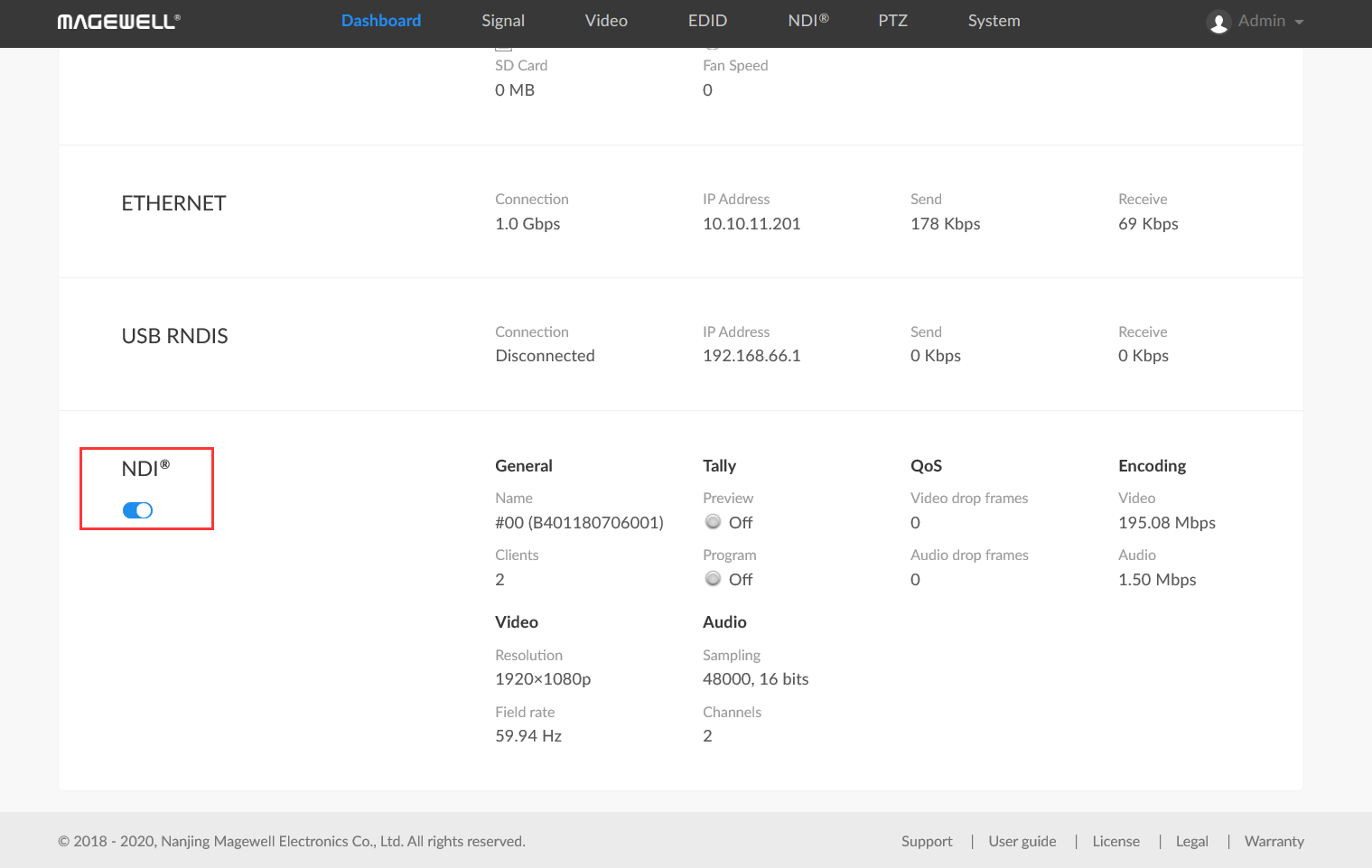 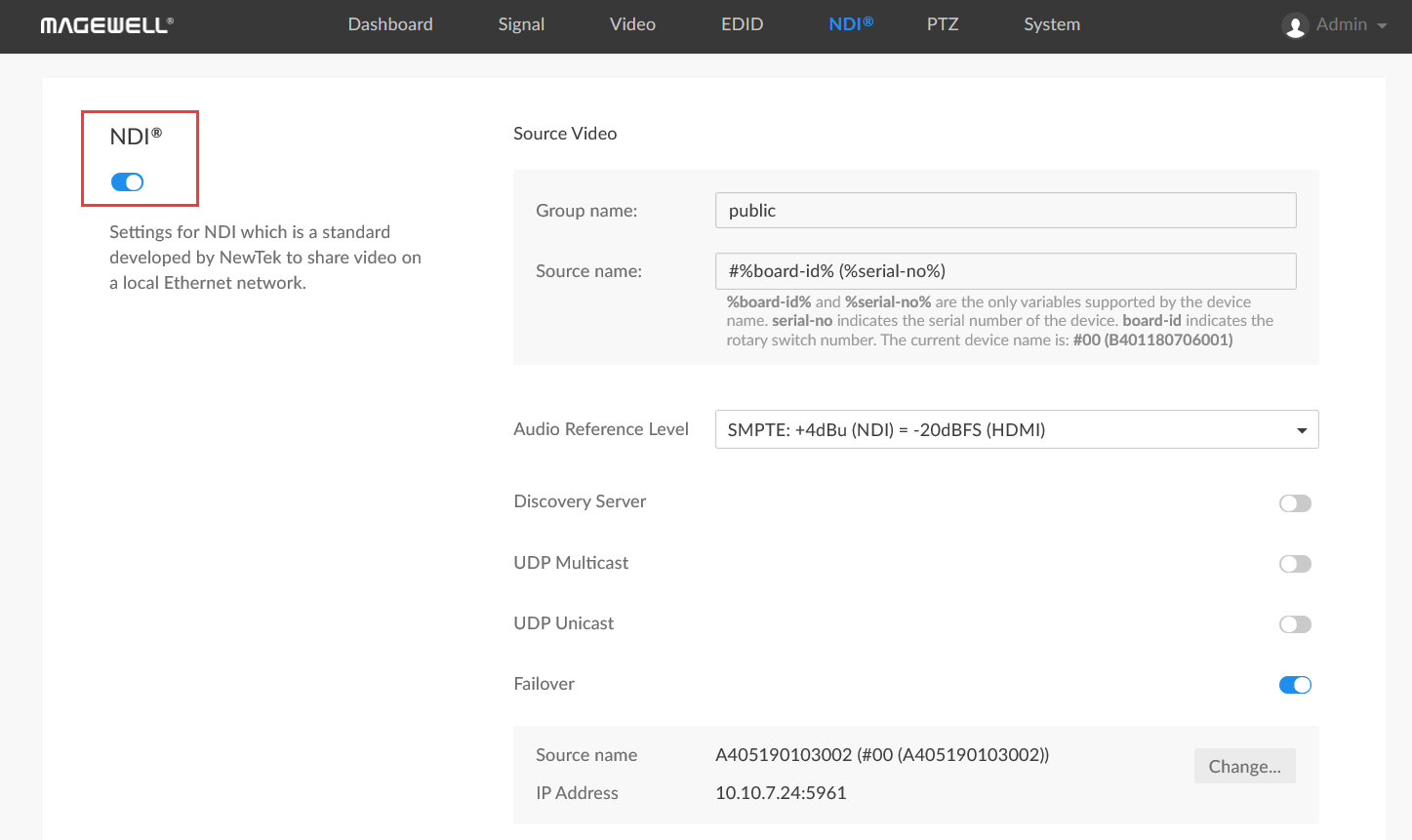 2. The source name of the main encoder is changed. 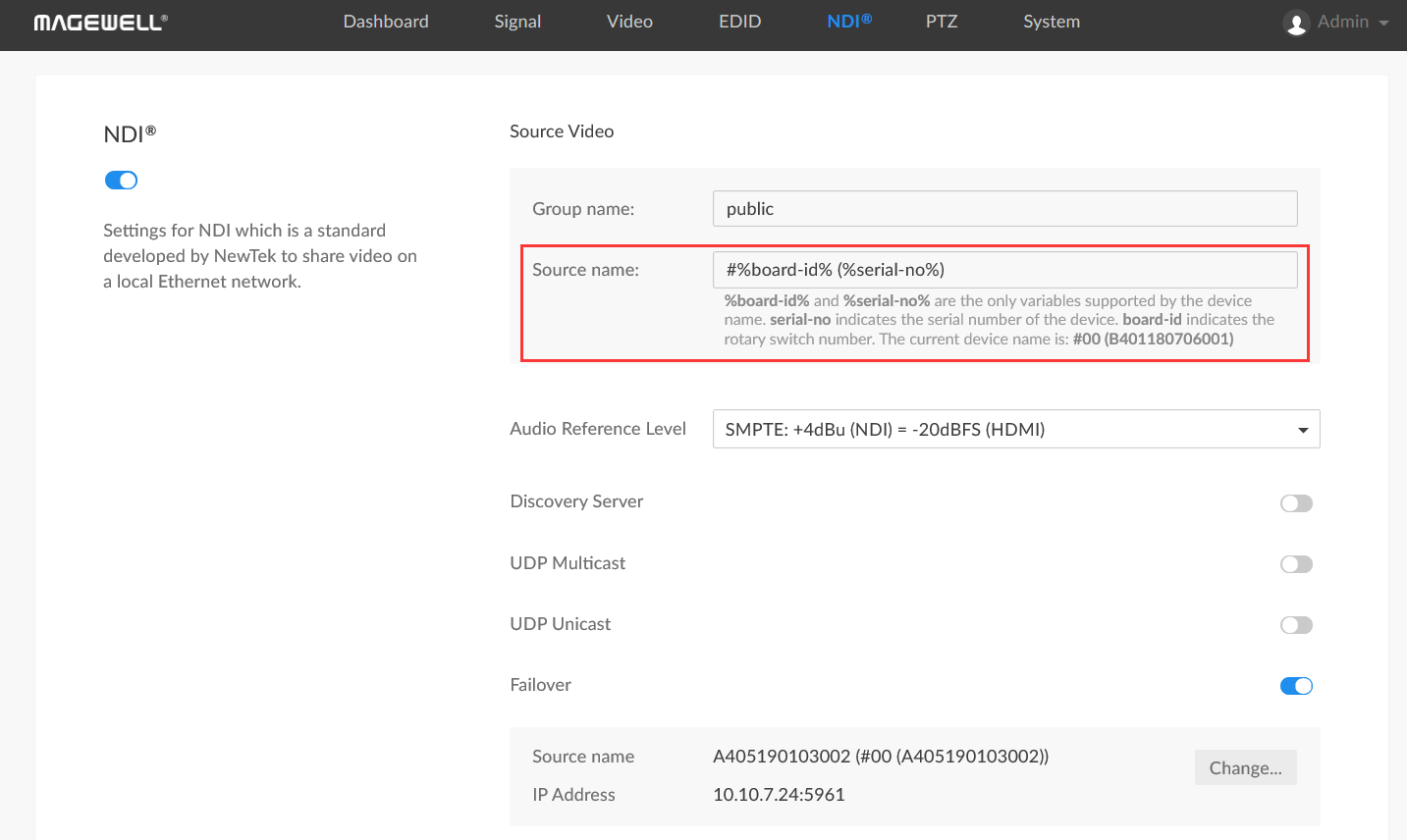 3. The decoder cannot reach the main encoder on the same LAN.

If the main encoder cannot be accessed on the same LAN as the decoder – possibly due to a network disruption or device fault – the decoder will begin decoding the NDI stream from the backup encoder. If connectivity between the main encoder and decoder is restored again, it will automatically switch back to the main NDI channel.

In practical applications, the failover function of Magewell Pro Convert encoders can also be used to quickly switch between two NDI streams (such as different video sources) for simple production.